So I’m a huge huge fan of Akihira Shiro’s debut release Ame to Kiss and was thus pretty excited to see she had a new story already running in Craft. I bought the two latest volumes specifically because I was really impatient to read every available chapter of Kii Kanna’s Yuki no Shita no Qualia but I’d be lying if I said Akihira Shiro’s illustration on the cover of volume 62 had nothing to do with it. 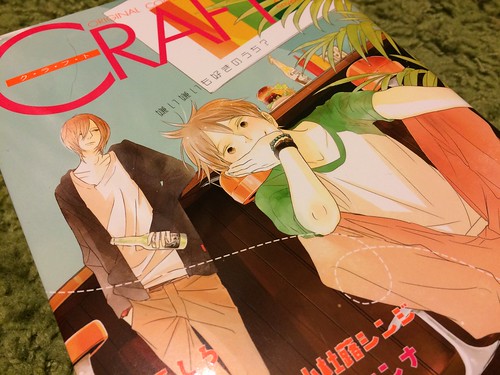 I admittedly was somewhat nervous about reading it. It’s not that rare that I love an artist’s first work (or at least the first work I read by them) and then have too high of standards for the second release of theirs I consume. But two chapters in I’m already pretty in love with both characters and their overall relationship.

The main character, Furukawa, is a huge music head—he’s happy to spend all of his spare time at work, as he’s a staff member at a small music club “Big One”. He applied and was hired thinking he’d get to hear lots of amazing music and meet lots of amazing artists, but in reality… he’s usually relegated to outside advertising, clean-up, or the merch table. When what he really wants is to work the bar, which is right near the stage.

It doesn’t help that he can’t seem to get along with his manager Kitayama. 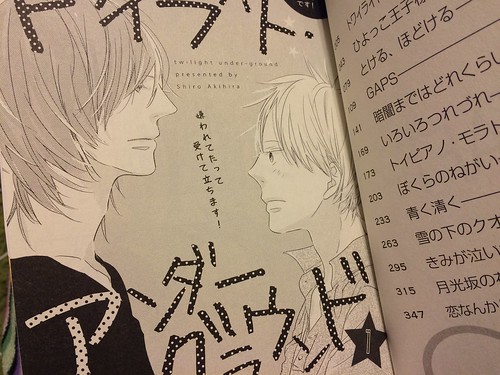 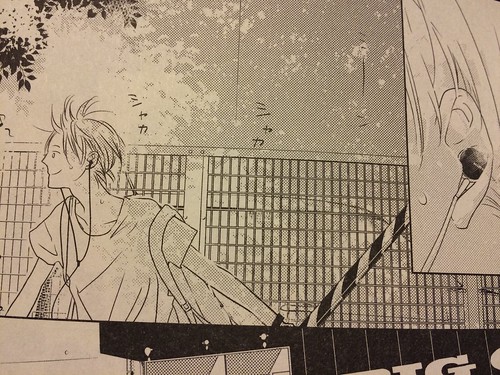 Kitayama never picks him for the good jobs, is always picking on his work, and is just generally cold toward him. And Furukawa doesn’t even understand why. It’s to the point where he doesn’t even like going to coworker outings if it means having to be around his boss.

But the mood between them starts to change when Kitayama saves Furukawa from getting hit in the head with a ladder one night during clean-up. Furukawa doesn’t like Kitayama much, but credit is given where credit is due so he says a simple but sincere ‘thanks’ to Kitayama for saving his head from certain pain and possible concussion. It’s Kitayama’s response, then, that comes as a surprise. 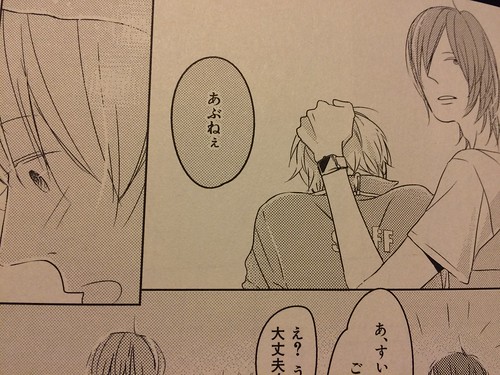 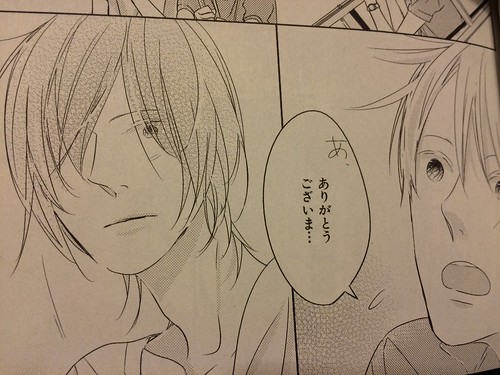 This is the first time Furukawa has ever seen an expression other than coldness and disinterest aimed at him from Kitayama. And not only that, but such an open, flustered, embarrassed expression over something as simple as a ‘thank you’?

Not only that, but the next day at work Kitayama puts him on the drink bar—the job he’s always lusted after! And when he flubs it, Kitayama is mostly patient and teaches him how it’s done. During outside cleanup Furukawa is frustrated with his mess-up but determined to show Kitayama that he’s dead-set on improving.

However, voices soon lead him to the back of the building to find Kitayama and another young man arguing. Initially Furukawa isn’t entirely sure what they’re arguing about, but when Kitayama says to his partner “there’s someone I’m in love with now so I don’t want to be with you anymore” it becomes shockingly clear: this is a breakup quarrel between men. 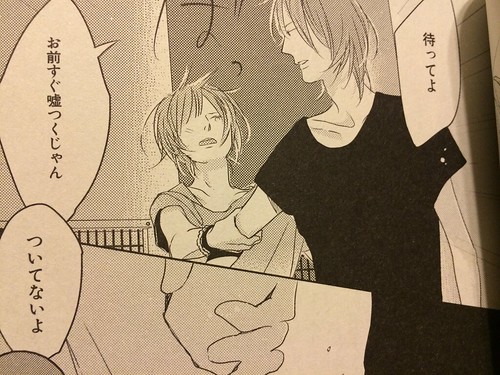 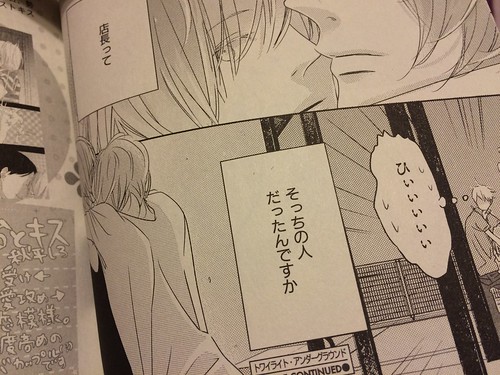 But just as Furukawa is about to see himself out and away from their argument he drops the garbage bag he was carrying and it rolls directly into their line of sight. Busted. 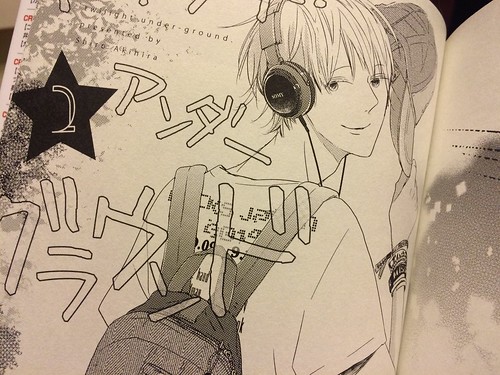 Onto chapter two! Furukawa can’t just forget what he witnessed with his boss that night—but it’s causing him to be visibly uncomfortable around Kitayama to the point where Kitayama has to take him aside for A Talk. Furukawa denies being uncomfortable, but Kitayama nonetheless promises he doesn’t put his hands on straight men, and requests Furukawa please not quit.

The next day at school Furukawa thinks over everything that happened between him and his boss, and suddenly it occurs to him… Kitayama’s flustered expression at his gratitude, him saying to that other man that he’s currently in love with a straight man… could it be he’s possibly in love with Furukawa?? Initially Furukawa is embarrassed at himself even going down that path, but somehow his curiosity is piqued. 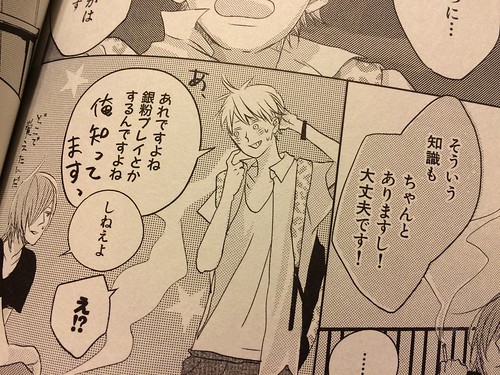 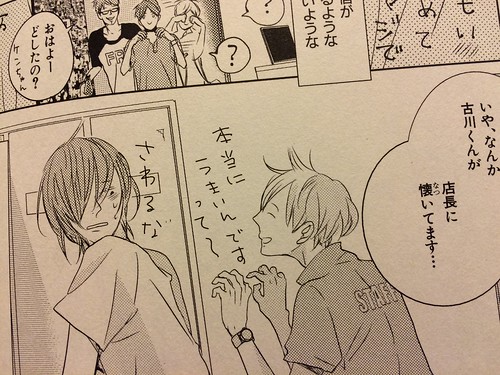 Never the type to sit back and wonder, Furukawa starts approaching Kitayama head-on. Following him around like a puppy, asking him countless questions, experimentally calling him by his first name, excessive touching. He wants to see Kitayama’s expressions, test his reactions. He even goes to a coworker outing for the first time and sits right across from his boss. And he’s not disappointed—Kitayama’s flustered, confused, awkward reactions to Furukawa’s overbearing attentions are amusing and strangely exciting. 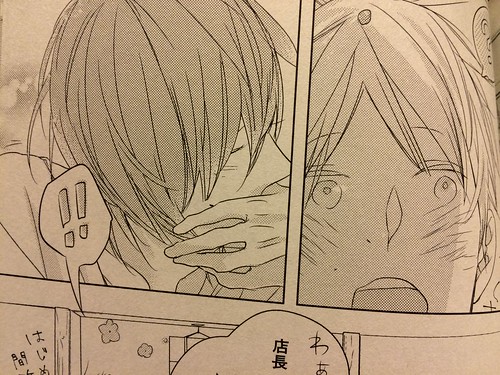 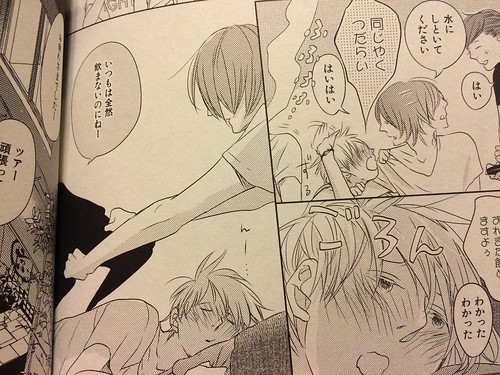 After being tortured by Furukawa’s ridiculous affection all night, poor Kitayama gets stuck with Furukawa’s drunk ass after the last train goes through. And unfortunately for him Furukawa seems like a very affectionate drunk. Taking Kitayama’s hand. Lying on his lap. Jumping on his face while they wait for a taxi to take Furukawa home. Kitayama doesn’t understand what in the world is going on, and perhaps Furukawa doesn’t entirely understand either. 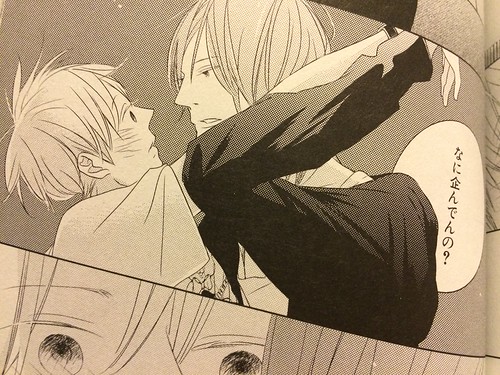 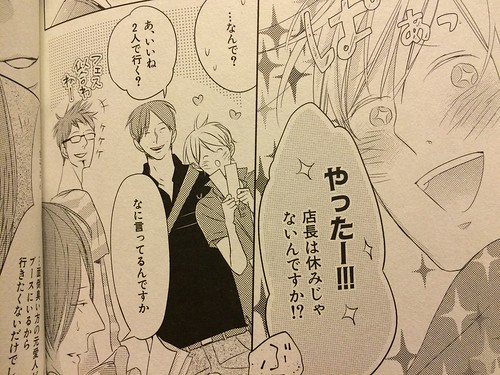 The second chapter ends on the two of them essentially being forced to go to a live show together. More time alone together! I’m excited to see how that will go!

Furukawa is so cuuuuute I love how simple-minded and gung-ho he is with his emotions. Even though he was initially quite unsure at how to approach Kitayama’s sexuality he’s definitely not afraid to flirt with him quite a bit to satisfy his own curiosity. Just as much as I enjoy all of Kitayama’s flustered expressions over Furukawa’s plays at affection, I also really love Furukawa’s reactions to them. I want t see how the future of their relationships plays out.

I like the style of ‘moe’, too, that Kitayama encapsulates. Not entirely tsundere, he hides his emotions until they;re accidentally forced out. His ‘hidden’ feelings for Furukawa are so cute and pure, and while I feel a little bad that Furukawa is essentially playing around just to get a rise out of him it’s cute so see his sincere reactions.

Just like Ame to Kiss this story has a very sweet, emotionally fulfilling vibe. Personally I really love stories like this, where the ‘purposeful’ angst is fairly minimal. While I’m sure there are some slight rocky emotions on the horizon for this couple it’s very well-paced with many wonderful cute moments that make your heart skip a beat!

if you haven’t checked out Akihira Shiro yet please do yourself a favor an look into her work! Her art is so charming and you can’t help but fall for her charaters. I look forward to not only the rest of this series, but any of her future releases. And know that after I’m finished typing this, I will very likely go on to reread Ame to Kiss before bed.