Good afternoon! It’s been a while! Lately I’ve felt lonesome for the chance to talk about BL, and since I’m done with what I feel is the most difficult part of my schooling (the whole taking classes I’m not interested in, maintaining a 4.0, being admitted into a strong Japanese program, etc. part) I figured it wouldn’t hurt to revive my baby. And what better way to revive it, than post a small report of the Kurahashi Tomo cafe I attended last month? 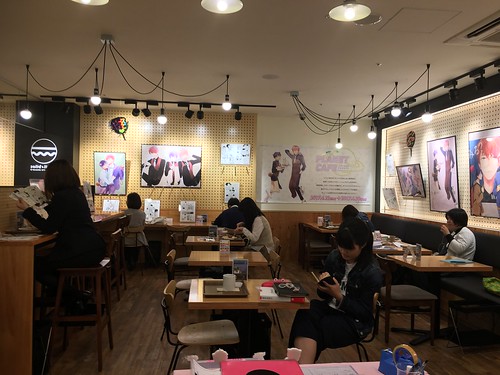 About a week before we left for Tokyo, Kurahashi Tomo announced on her twitter there would be a cafe for her recent series Pink to Mameshiba at ComiComi Studio’s Machida location. This was suuuuper exciting, because I always miss the cafes and events (OnBlue gallery…….) for series I like–they always end right before we get to Japan, and start right after we leave. It’s terrible. But we got super lucky on this trip and I was able to attend Yuri!!! on Ice Adores cafe, Yuri!!! on Ice Namja Town, Touken Ranbu cafe, and Kurahashi Tomo’s. Bless. ;;

To be honest, I was pretty nervous about it. My ability to communicate in Japanese is still pretty poor, and while I was able to successfully pull off the Yuri!!! on Ice cafe two days earlier I was terrified I’d show up and be told I actually needed reservations. Also, go ahead and laugh at me if you’re a seasoned Japan traveller, but I’d never taken a multi-line train change before. So to go from JR to non-JR kind of terrified me. 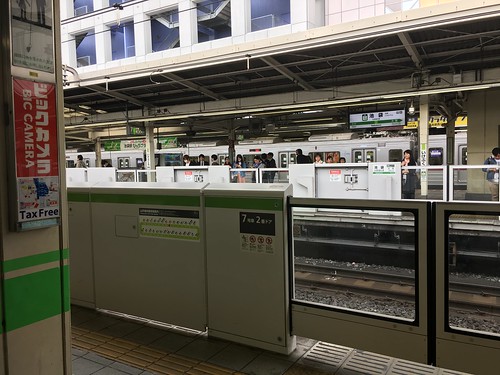 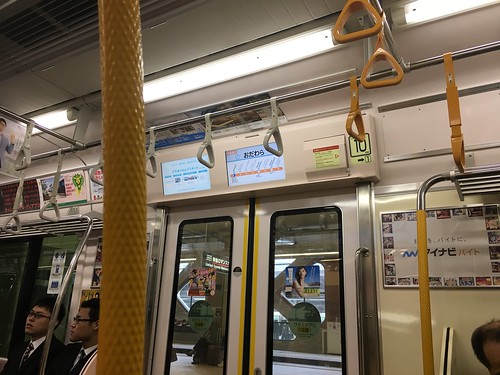 Thankfully, after a whole lot of fretting and anxiety we were successfully able to get from our AirBNB in Ikebukuro all the way to Machida. Machida is a much smaller area in the southwest border of Tokyo, and I had never been there before. So I was admittedly a little surprised this small semi-residential part of Tokyo was where ComiComi Studio decided to not only set up a shop but also a cafe. I would have expected the usual: Ikebukuro, Akihabara, even Shinjuku or Harajuku. But honestly, it was nice to travel as far away from the city center as possible on a Saturday during tourist season. 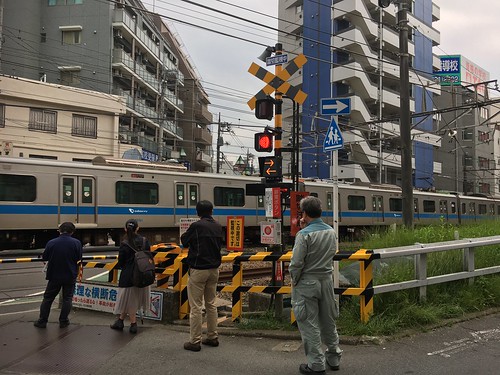 It took… a little searching…..

Okay, a lot of searching. There are two stations in the area, and they lie diagonal to each other so there was a lot of “where are we??” and my phone also didn’t help since the GPS was going a bit giddy. Thank goodness we could take our sweet time finding the place. But it was just up the top of a Marui department store attached to the station, and not too difficult to find once we’d found our footing. (Also, with three people keeping their eyes out for the sign… orz) 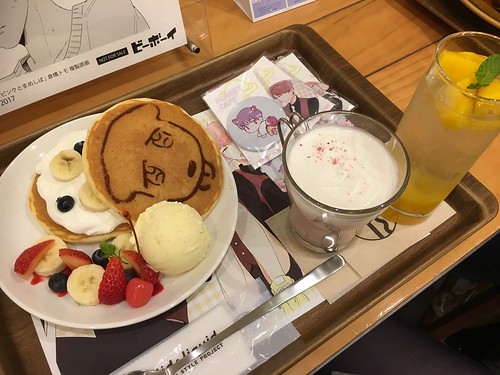 Admittedly, I regret not getting a picture of the full menu. But you can see everything at the website, including other past BL cafes. Currently it’s Ougi Yuzuha, and before Kurahashi Tomo was Natsumizu Ritsu, Watanabe Asia, and many others including general games and entire publishing lines. Also, check out their night menu which features alcoholic drinks based on BL comics, and their twitter where they announce upcoming events and menu changes.

Unfortunately, I went too early in the day for them to have any of their alcoholic beverages available so I didn’t try any of them.

Kurahashi Tomo’s cafe was called “Planet Cafe” and was somewhat idol-themed to go with her comic. I don’t know about anyone else, but I absolutely loved Pink to Mameshiba but I’ll save my thoughts on the comic for another day if anyone is interested. There was a pancake set, a pastrami sandwich set, a sakura latte, and a mango drink. For every menu item you could choose from one of four pins, and for every drink you got a special coaster. If you didn’t want anything on the menu but still wanted to just bask in the surroundings of Kurahashi’s beautiful artwork, there are also general food options–you just don’t get any of the special extras if you buy from their regular menu. They had some pretty delicious-looking cakes though.

My sister bought from the normal menu, but I bought three things from the special Planet Cafe menu: the pancake set, the sakura latte, and the mango drink. My friend Victoria bought the pastrami sandwich set. Ordering went smoothly aside from a small language gaffe, but we did not, in fact, need a reservation–it’s essentially just like a regular cafe attached to ComiComi’s actual comic shop. 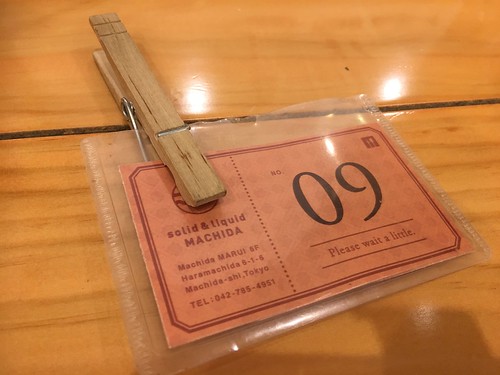 I was number nine; the wait for the food wasn’t too long. We found an area along the wall with enough space for three (something of a feat in Tokyo tbqh) with the comic pages from the concert kiss scene. 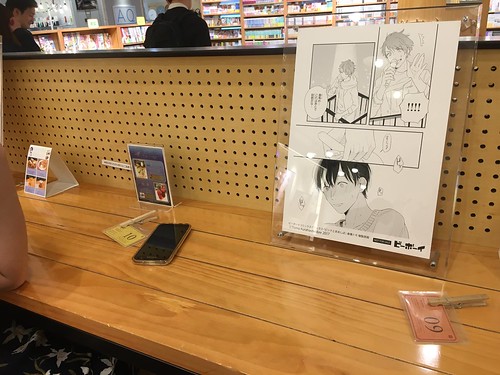 honestly it just made me really really want to reread the comic right then and there but alas. Here are also some photos of the surrounding area: 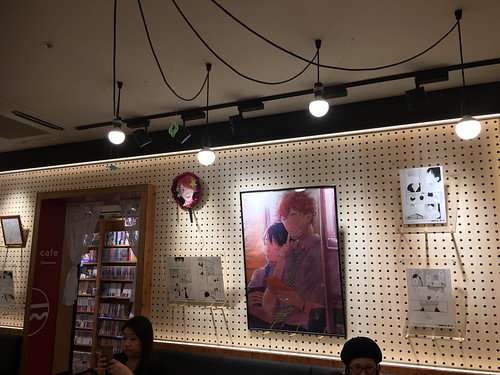 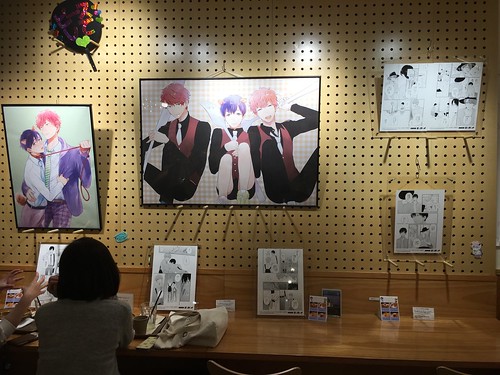 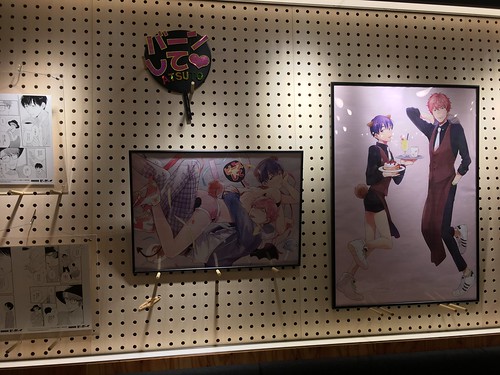 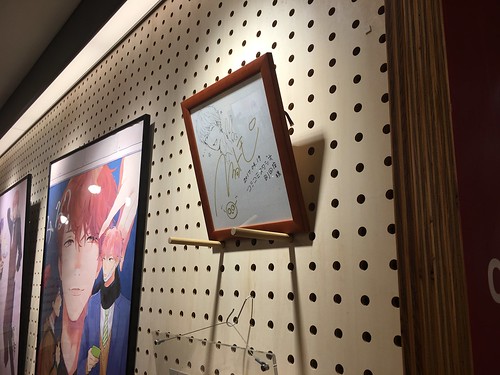 You can’t really tell from my cruddy photos (sorry, taking pictures really overtly is often frowned on so I didn’t want to bug any of the other cafe-goers), but the actual BL event portion of the cafe is secluded to just one side–probably to respect and acknowledge that not everyone coming to the cafe wants to be surrounded by BL comic panels and illustrations. There were people from all walks of life at the cafe, tbh: old ladies, couples, mothers with their young children, women of various ages, etc. But one thing you kind of learn while in Japan is you can’t really judge a book by its cover and the image of what you think a BL reader is doesn’t always apply. Even the old ladies or the businessmen may well be fans of Kurahashi Tomo. You just never know.

After a whole lot of giddily staring around the room I got my food! 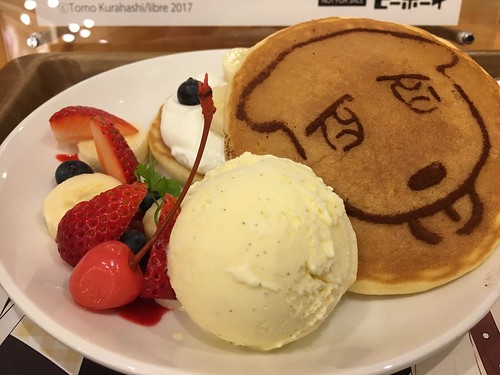 Shiba-chan pancakes! They were probably not the best choice as far as breakfast goes, but they looked so tasty. And they really were good!! Though I felt bad sinking the fork into Shiba-chan’s face…

I didn’t take any close-up shots of my sakura latte or mango drink, but you can see them up in the previous photo. (orz As you can tell, I’ve gotten rather rusty at this blogging thing since I had to stop for a year.) The sakura latte was good–a slight cherry sweetness with a little bit of salt! The mango drink I gave to my sister, but from the one sip I had it was very good as well. 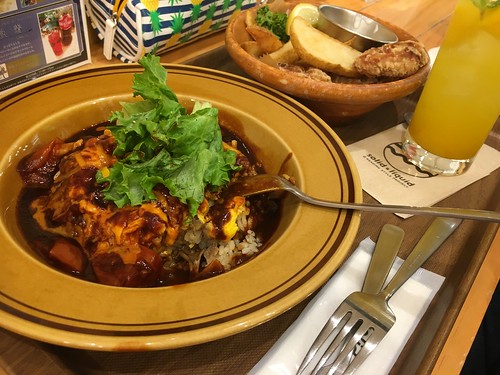 A somewhat fancy omelet rice with mushrooms and veggies, in a wine sauce (I think??) and fries. The fries could come with either ‘sour cream’ (which was actually ranch dressing lol) or a salsa. She also got a side of karaage which was absolutely delicious.

I don’t remember how Victoria felt about her pastrami sandwich, but it looked tasty if you aren’t like me and absolutely can’t eat tomatoes. Honestly, these speciality cafe foods can be pretty hit-or-miss regarding the actual flavor and quality of the food, but I was very satisfied with what we got. 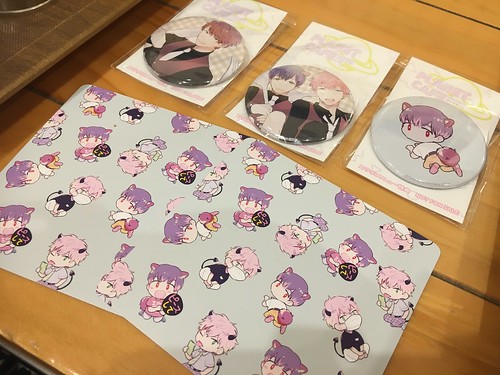 My loot, since I got two drinks and three menu items overall. There was a surprising amount of goods with Atsuto on them, considering he’s not even a part of the main couple lol. But his design is quite attractive, and it was probably to keep with the idol theme. 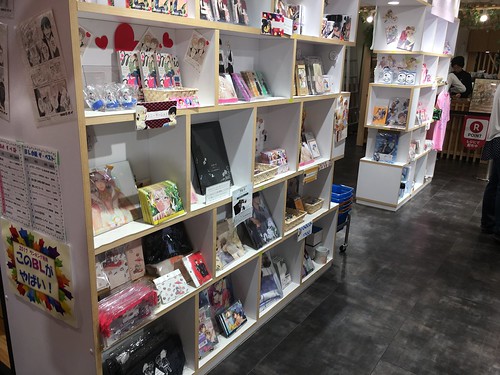 Of course, afterward we went to the actual ComiComi Studio store… I bought way too much Ten Count tape but honestly it made me so happy to see so many goods for BL comics. I’m glad they’re seeing that BL fans are willing to support their favorite artists even in this way, apart from buying and reading the actual books. (In fact, I saw a girl with an entire BL ita backpack on our last night–which made me pretty pleased.)

Overall, I’m incredibly happy I was able to go to Kurahashi Tomo’s Planet Cafe. ;; While there wasn’t necessarily any content that I couldn’t get elsewhere aside from the signboard, it just felt good to be surrounded by other fans of the series as well as content from a series and artist I really love. There was a similar feeling with the other cafes I attended–a feeling of camaraderie that’s hard to find elsewhere.

Also, Kurahashi Tomo said she herself also went to the cafe. So perhaps she was there as well–you never know. *v*)

Anyway, thank you so much for reading, especially to those of you still following the blog through email or feed updates! I can’t make any promises on how frequently I’ll be back to updating this blog, or if I’m really back for good. But I have all summer off before I move away to school (and even at school I want to read as many comics and such in Japanese as possible to practice), so don’t be surprised to so quite a few more posts from me in the near future. Perhaps I’ll also post about Yuri!!! on Ice and Touken Ranbu cafes, or perhaps a re-introduction into which artists and trends I’m currently really enjoying? Please let me know what kind of posts you’d be interested in!