out with the old, in with the new.

what better way to head into 2015 than with a rambly post about my current feelings toward bl, right? Right. So let’s get into it.

if you’re wondering why I haven’t been posting here are often as I used to, the answer is simple but also a bit complicated. The simple version is: free! + work. The more complicated version is throughout 2014 it was hard for me to really understand how I felt about bl and the role it played in my life. While I know that interests often boom and bust on a regular basis, it felt weird for bl to take somewhat of a backseat after being so adamantly passionate about it for years. Was I satisfied with how much I still liked it? Did I wish I liked it less? Did I wish I liked it more? I wanted to talk about bl, but at the same time talking about bl felt tedious. It’s been a strange spiral.

which is not to say at any point that I grew tired of bl. Or stopped reading it. Or stopped wanting to read it, which was definitively not the case at all lol. Just that I was unsure of where my interest in bl was going to take me—if it was really going to take me anywhere. So I’ve still been plugging along, reading various random new titles, posting quietly on my personal blog but seldom elsewhere—not iamfujoshi nor here.

fast-forward to the end of 2014, I got a laptop for Christmas and thus decided to part with my trusty desktop and completely revamp my room, which I decided would finally include….. recycling…. all of my old bl mags.

I know there are two types of people in this world, some of which are cringing right alongside me and some who’re reading this asking themselves “why would you hold on to those old things??” I am a packrat and a sentimentalist, so

1. I don’t like getting rid of things I enjoy, and one aspect of bl I’ve always enjoyed is flipping through old bl mags way after the fact to see what I missed, what artists I originally bypassed that I’m really into now, etc. and

2. a lot of bl mags unfortunately have a lot of exclusive extra content. Artist interviews, extra chapters to promote tankoubon releases, posters, color pages, postcards. Which doesn’t even account for the numerous stories that run in the magazines only to get lost in the fray—Mieno Saori’s second volume of Hakumokuren ga Saita nara being a big distress of mine, and I also found stories by even artists like Ootsuki Miu, Tomoe Fumi, etc. from when they run in magazines that don’t usually carry them only to then get stashed away for a possible eventual tankoubon release. Discontinued stories that I loved from the beginning.

there are really very many reasons to have a hard time parting with old bl mags.

but I finally took them all off from the shelf, put them in a bunch of huge stacks, sat down with a pen knife, and got to work. 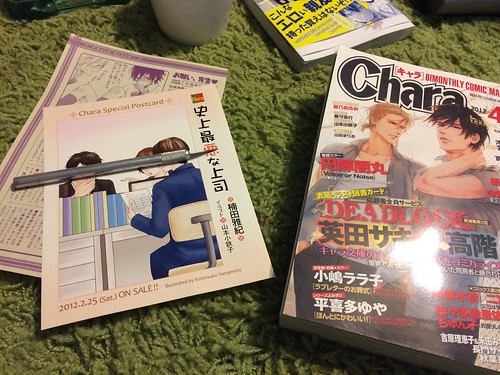 it’s strange, you’d think it would have the opposite effect—usually when you’re throwing something away it means your love for it has diminished and you no longer care enough to be bothered by parting with it—but going through the magazines for recycle has only cemented how much I really love bl as an entire genre.

which I guess is understandable, since it was one huge reminder of all the artists and stories I’ve loved over the years.

the point was to go through the magazines and cut out all the stories I’d loved that had never been given a proper release, as well as short extra chapters, artist interviews, reviews, and extra illustrations. And postcards, posters, etc. All that extra stuff that I’d lose if I tossed the whole magazines. I kept all of the posters and postcards of artists and illustrations I particularly liked, and then set aside ones I didn’t plan on keeping for a small tumblr giveaway. 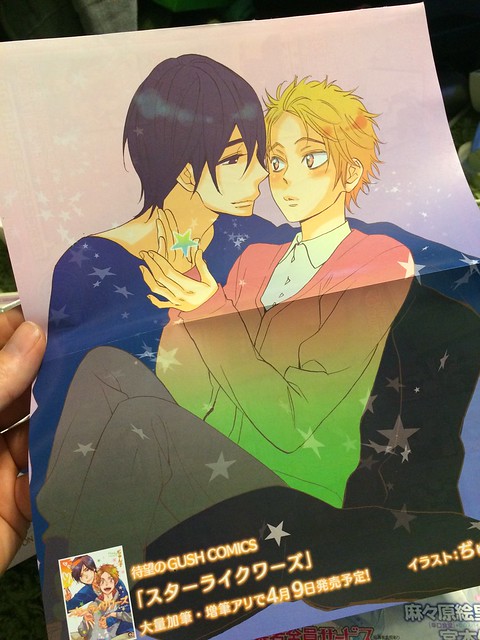 see? who knew there was a little poster released for Star Like Words? That’s what makes going through all these magazines at a later date so interesting, and shows why it’s so hard to just recycle/sell some of them. 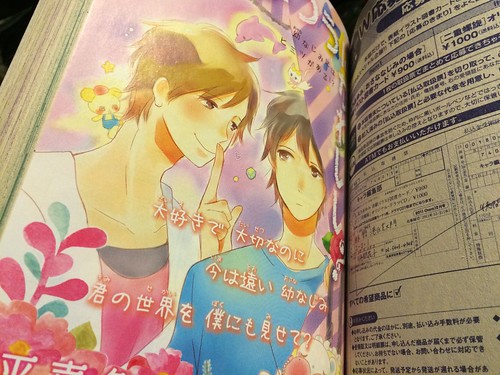 beautiful color illustration by Hiraakiya Yuya from an old issue of RuTiLe. 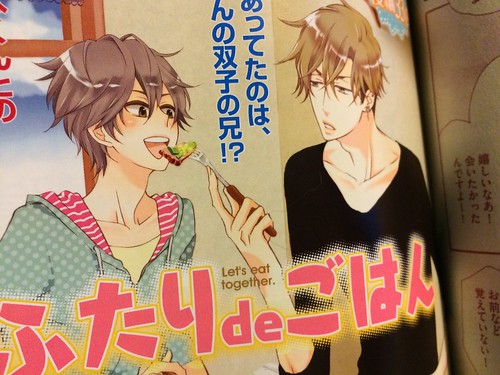 I admittedly have a really bad habit of just perusing magazines when I buy them—reading a select few interesting-looking stories and then setting it aside for ‘later’. 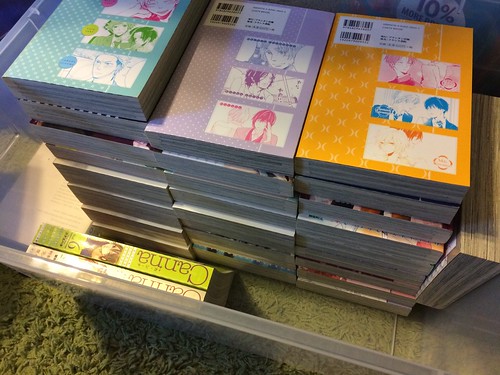 I wasn’t able to convince myself to go through and throw away the 20+ issues of Canna I own. orz;;; Baby steps. 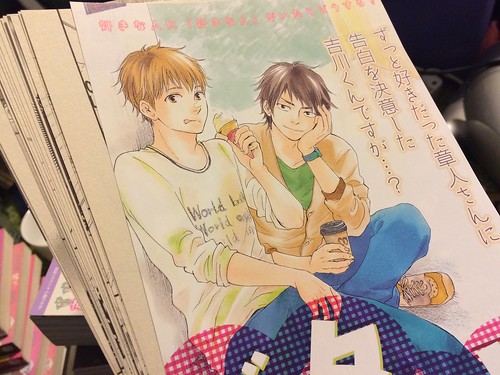 story by Yamamoto Kotetsuko that I read a long time ago and then completely forgot about. I think this one was randomly in an issue of drap? 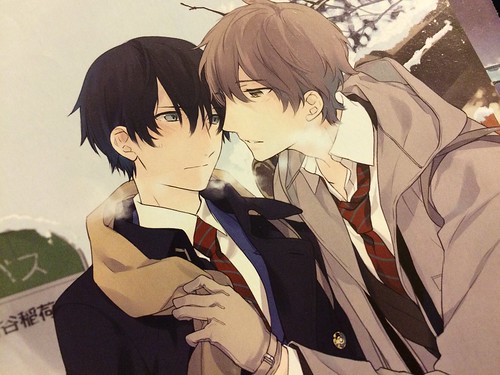 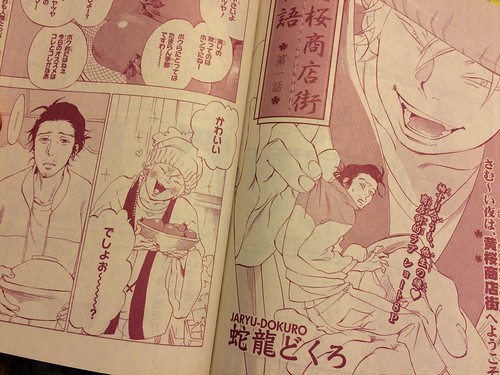 how the hell did I forget about this story by Jaryuu Dokuro?

people always say it would probably be smarter to just wait for tankoubon releases instead of buying magazines, but you really miss so many random jems by artists you love as well as artists you’d have missed otherwise. 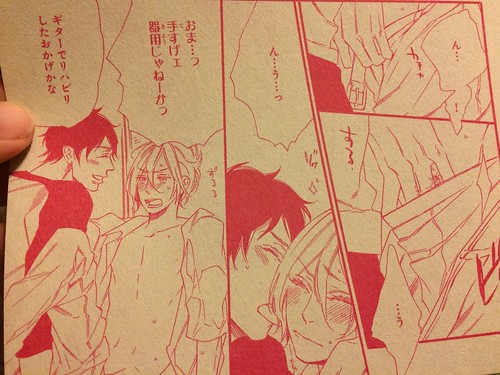 look at this cute story by Ootsuki Miu that has her older art style. 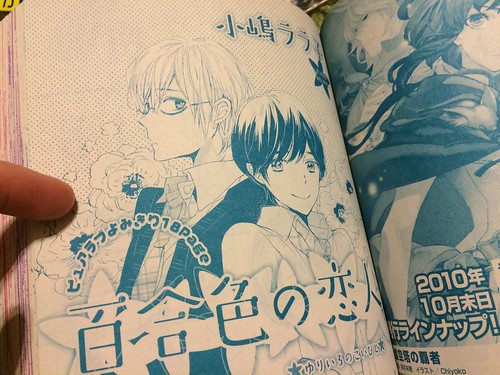 my favorite story ever by Kojima Lalako. 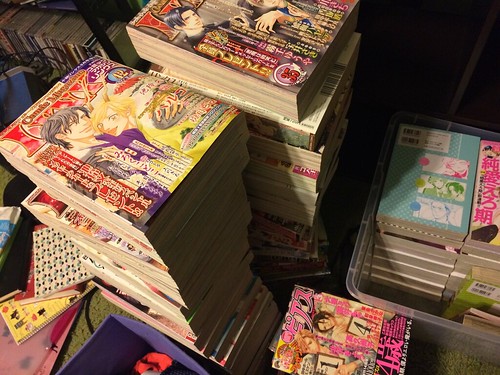 the stacks and stacks of bl I ended up recycling. ;;

in the end I got rid of more than seven paper grocery bags of bl, which accounted for around 100 magazines. 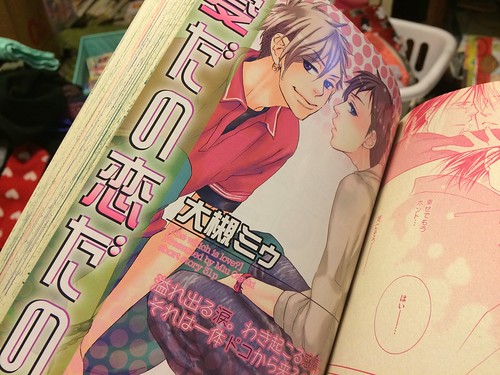 if you wanted to know just how old some of my issues of drap were, here is one of the first chapters from Ootsuki Miu’s earlier drap tankoubon Ai dano Koi dano. 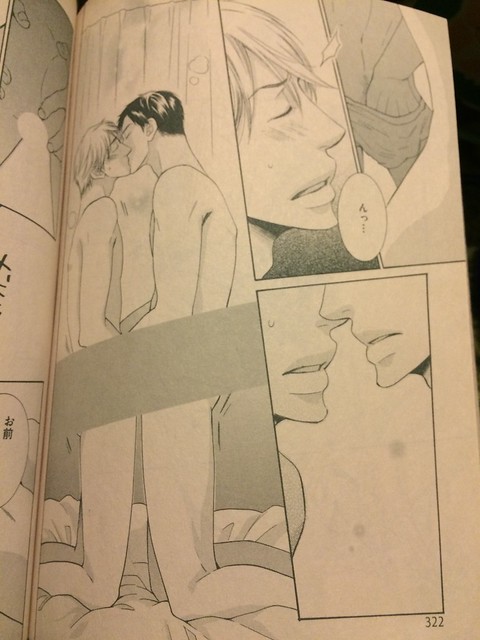 remember that one really really censored issue of drap? If you do, you’ve probably been reading my blog a pretty damn long time so thanks!! 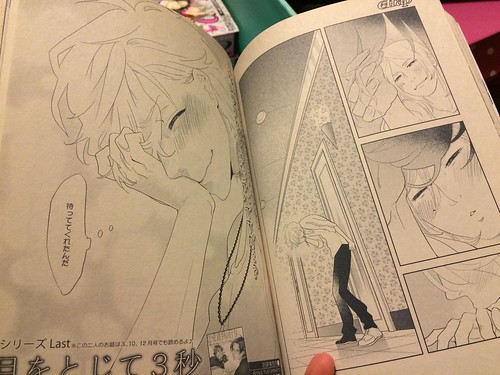 ugh I remember impatiently waiting for the new chapters of this story, dying inside. 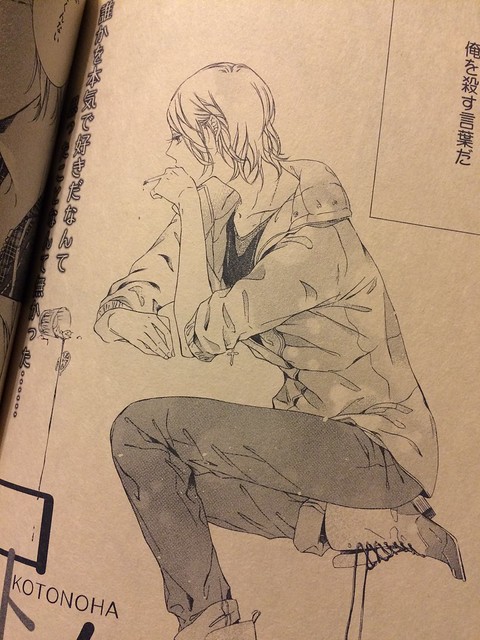 then a short weekend break away from home in which I enjoyed some new bl instead of going through my old stuff. 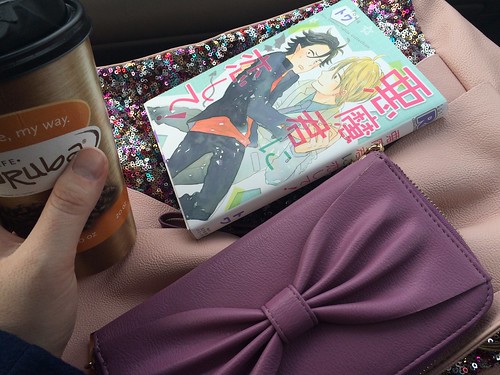 Towa on the go! 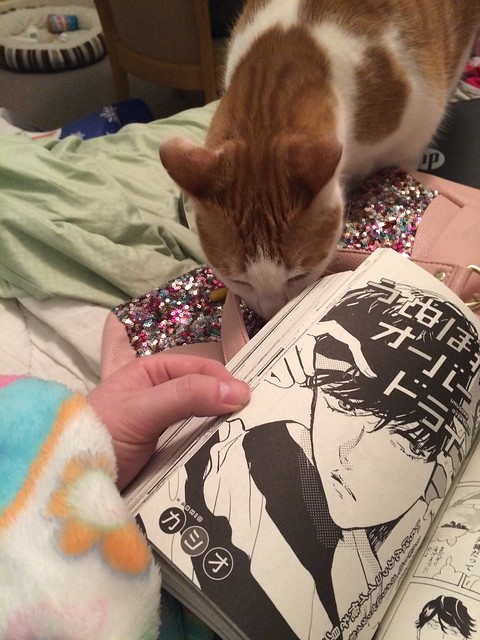 enjoying Kashio’s new onBlue story with the Jimmers. This story was actually super cute—please remind me to review it sometime soon. 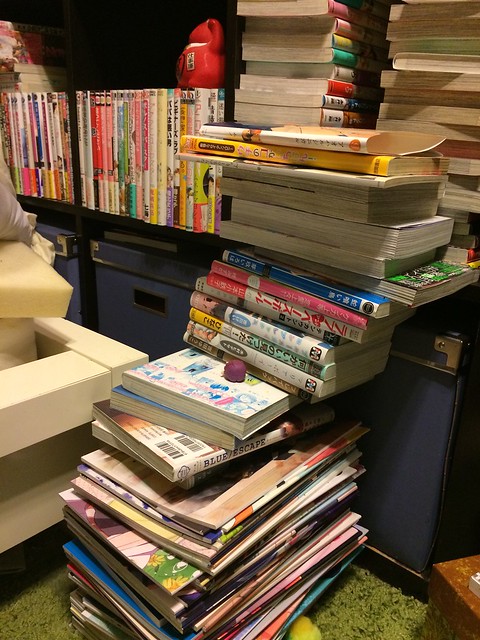 back to work; I’m getting there!!

please cry with me over how bent up that Muno dust cover got. ;; all the doujinshi are harurin books from my Tokyo trip btw. 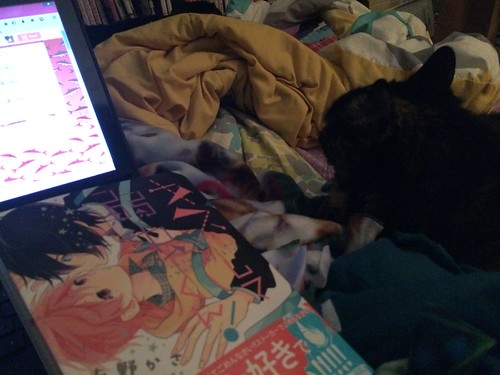 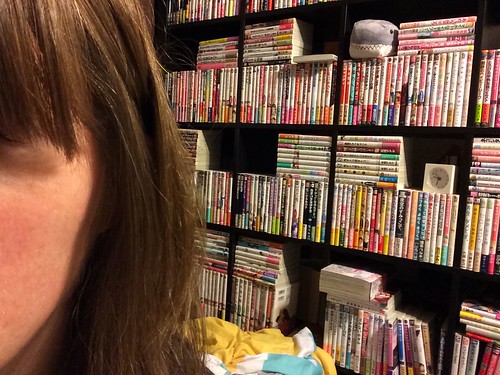 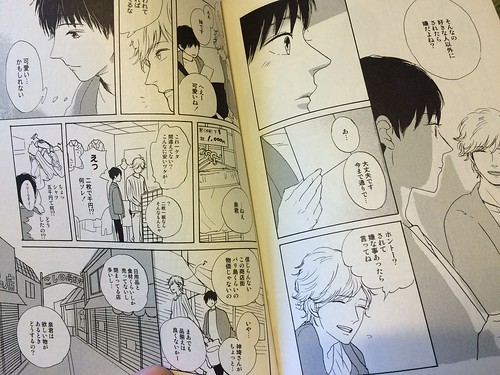 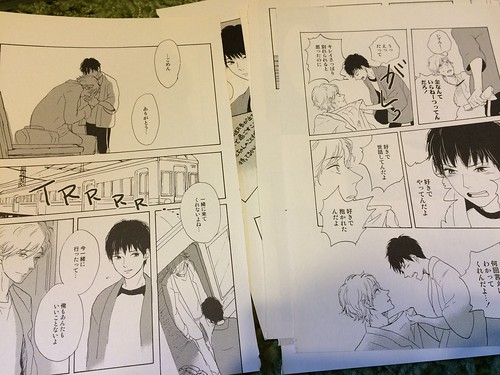 an artist that ran in Cab just twice, Komatsu Butai, who then disappeared completely off the map. Her stories and art are both adorable, so I definitely cute all of her pages out for safe keeping. 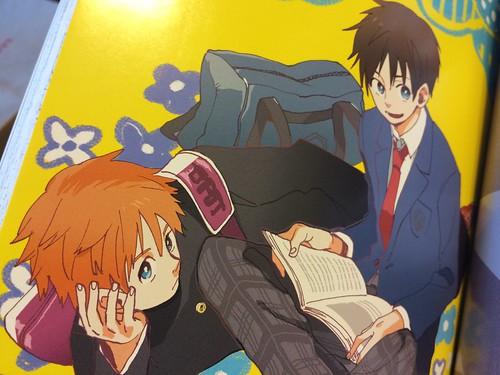 yes, I did shred and discard all of my issues of Cab. ;; The anthology that started my bl craze is now no longer in my room. I also shredded and recycled all of my old issues of HertZ. 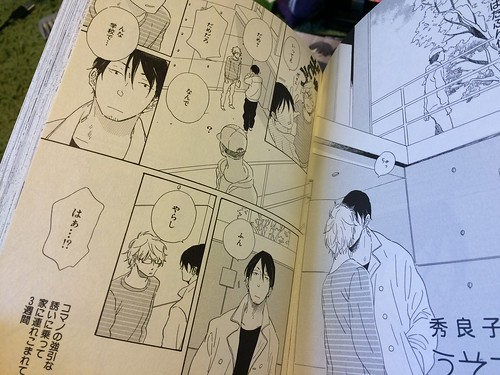 remember when this amazing story was only just running? 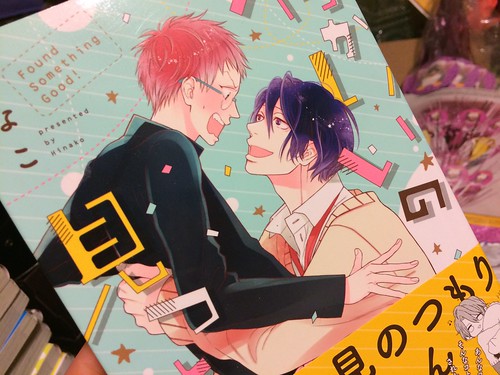 this is why I need to cut down on all the older excess titles I have: sometimes while sorting through my books I randomly find one I haven’t read yet.

anyway, I’m still not 100% finished—I need too go through my tankoubon and resort my bookshelf. And I need to update my sales post, too, and finally get on that giveaway.

I’m pretty excited about 2015 in bl!! Admittedly this will be a fairly busy year for me on the personal front, but I hope to make more time for bl as a hobby and try to be more attentive toward this blog as well. Of course, I’m not going to make any promises since it seems every time I promise to post more it’s followed by a prolonged absence lol. We’ll just have to see where my love for bl takes me in 2015. But I do know I already have a 40+ book long wishlist on amazon just for this year alone, and since free! is now officially over my hobby-related free time will be more dedicated to boys love comics again.

I’ll hopefully post some pics of my bl bookshelf as soon as it’s complete again! \o/ Here’s to another fun year of bl!

7 responses to “out with the old, in with the new.”